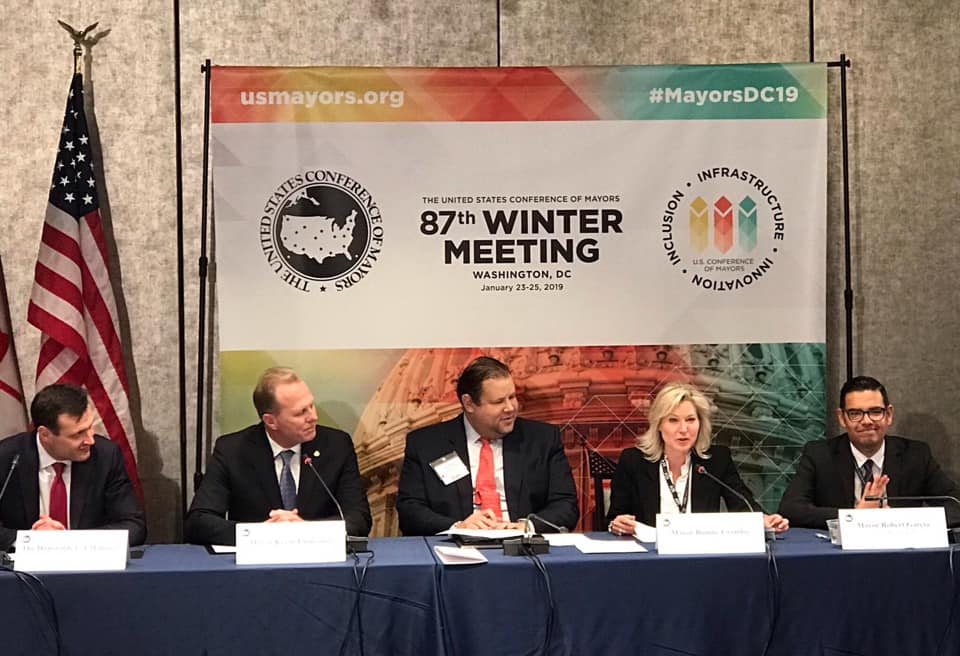 The following remarks were delivered to the USCMA Panel at the U.S. Conference of Mayors in Washington D.C.

“Good afternoon and thank you for inviting me to join you today for this discussion.

“Thank you Mayor Faulconer, Ambassadors, and fellow mayors for your time today.

“I have the privilege to be representing the Federation of Canadian Municipalities at this meeting and to bring the perspective of Canada’s mayors.

“Last year my colleague, Mayor Don Iveson of Edmonton spoke to you. If you’ve met him, you know I have big shoes to fill, literally and figuratively.

“Last year at this time when he spoke to you, we were still renegotiating.

“It was well over two decades old and in need of some fine tuning but it set the stage by defining free trade between our three countries.

“It resulted in our economies being highly intertwined, creating millions of jobs and prosperity on both sides of the border.

“Today, we have the USMCA or CUSMA or T-MEC or just “new NAFTA.” By and large, we have reached a modernized agreement that serves the interests of each nation.

“While we may debate some of the specifics, on the whole, it is a strong agreement that was only reached after tremendous efforts by all parties involved.

“Why is it so important that we proceed?

“Over 14 million jobs depend on free trade between our countries – These jobs are in our communities, they are our residents, and their success is our success.

“Our three countries represent a $21 trillion, 480 million consumer market – the largest economic region in the world.

“Canada is the number 1 customer of 36 US states, and in the top three for 48 states.

“Canada buys more from the U.S. than anyone else does—including the EU, Mexico, China and Japan.

“20 million Canadians visit the US annually, pumping $20 billion into the American economy.

“The statistics are as endless as they are enormous. But it is more than just numbers.

“Free and fair trade between our three countries is essential to our national, state, and local prosperity, our security, and our connection as a people. We are better together.

“Every Mayor around this table and at this conference appreciates that while trade agreements are negotiated at the national level, their impacts are felt at the local level.

“My City of Mississauga is home to 91,000 business – we are the business capital of Canada in fact.

“Many of these businesses rely on free, fair and reciprocal trade with the U.S.

“Cities are hubs of economic growth and innovation – we power the nation. To strengthen our local economies, cities look to build global relationships to attract investment and grow our export businesses and industry.

“Especially tariffs. As many of you know, products are often shipped back and forth across the border several times before becoming a finished product. Tariffs drive up the cost of doing business, hurt industry, the economy and often that cost is passed along to consumers.

“As Mayors, we have a strong voice and we can impact change at other levels of government – at the state and national levels.

“It is my hope that by working together as mayors, we can drive this deal home and continue our strong and prosperous relationship.

“I look forward to this discussion and thank you again for the invitation to participate.

“Mayor Faulconer, back to you.

“It’s an honour to introduce Canada’s Ambassador to the United States, David McNaughton.

“I have known David for many years and can confidently say, Canada has chosen the best person to represent our national interests in Washington.

“He brings a wealth of public and private sector experience on both sides of the border, and a strong understanding of the importance of the relationship between our countries.

“I know he was instrumental in achieving the “New NAFTA” and is working hard to see it ratified in all three countries.

“David, the floor is yours.”