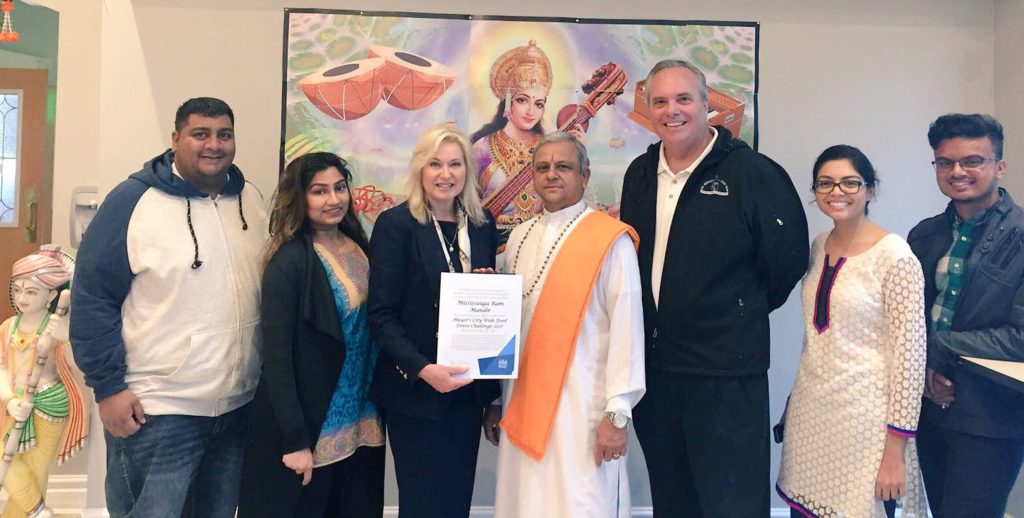 On behalf of everyone involved in the 2017 Mayor’s City-Wide Food Drive, we want to thank the vibrant, active and engaged faith community from Ram Mandir for generously raising $1,000 and 1,250 pounds of food toward this year’s Thanksgiving campaign, Mayor Bonnie Crombie said.

Shri Ram Mandir, located in Mississauga, is one of Canada’s leading Hindu temples.

Pandit Roopnauth Sharma, founder and Spiritual Leader of Mississauga’s Ram Mandir, said “We at the Ram Mandir feel very privileged to help those in need. This has been an ongoing mission at our organisation to do for those who need help and giving to the food bank has been an annual event that our youth take great pride in and this year is not any different as we have contributed thousands of pounds of food over the years and this year our contribution will exceed previous years. We would like to wish everyone a Happy Diwali over this festive period when charity is the word of the day and when good overcomes evil. We pray for the happiness of all.”

Mayor Crombie would like to extend an invitation to you to join her at the 2017 Mayor’s Citywide Food Drive campaign wrap and results announcement on Wednesday, October 18th at 4:00 PM.

This year’s campaign goals were to raise $125,000 and 225,000 pounds of food from September 16 – October 13. Achieving these goals would make it the Mississauga Food Bank’s biggest Thanksgiving ever.