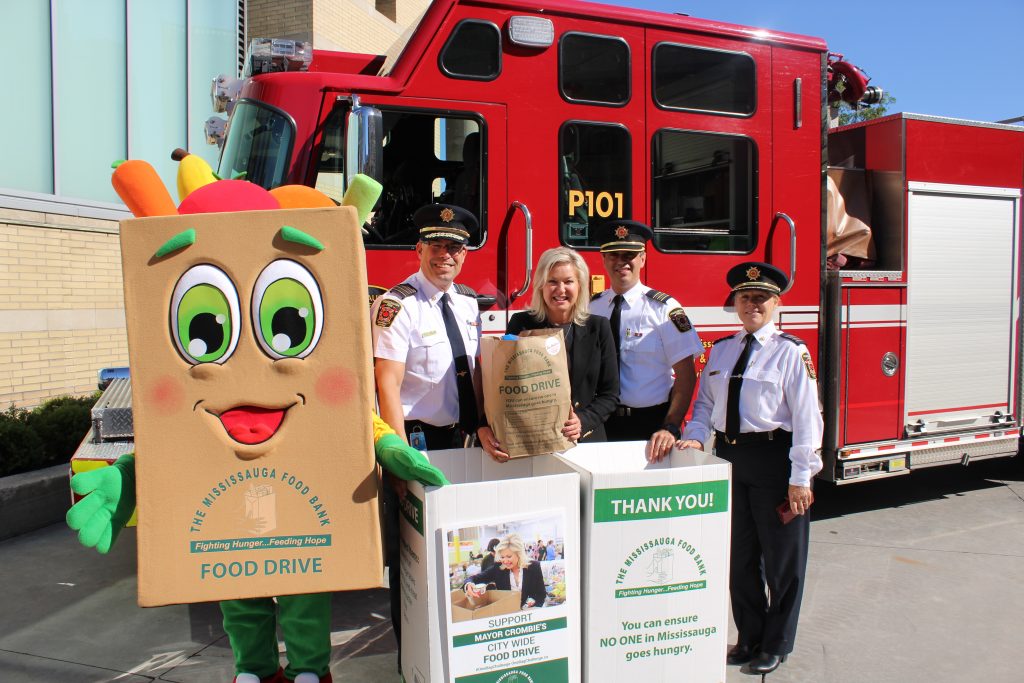 Mayor Crombie kicked of her Thanksgiving Food Drive today with a flag raising ceremony in Celebration Square, announcing her goals to raise $315,000 and 250,000 pounds of food. Since being elected in 2014, the Mayor has challenged community members to participate in her annual One Bag Challenge in support of The Mississauga Food Bank. The campaign will run until October 20, 2019.

“More than 100,000 Mississagua residents live in poverty and struggle to provide adequate nutritious food for themselves and their families,” says Mayor Crombie. “Time and time again, I have witnessed the giving and generous nature of Mississauga residents. We must continue to give back and help in order to make Mississauga a city where no one goes hungry. I hope that every resident who is able will once again rise to the challenge and join me in donating food or funds to help our hungry neighbours.”

If this year’s goal is reached, it will bring the total amount Mayor Crombie’s One Bag Challenge has raised over the last four years to over $1.3 million and 1.25 million pounds of food!

“Last year, we saw a 13% increase in the number of neighbours turning to neighbourhood food banks and a 52% increase in the number of seniors accessing our services,” says Meghan Nicholls, Executive Director of The Mississauga Food Bank. “Mayor Crombie’s Food Drive is an incredible opportunity for our community to ensure our hungry neighbours have access to healthy, nutritious food and remind them that Mississauga is a city that cares for those in need.”

Mayor Crombie’s Thanksgiving Food Drive will run from September 17 to October 20, 2019. Food donations can be dropped off at local fire stations, select community centres and libraries, grocery stores and at The Mississauga Food Bank. Financial donations can be mailed to the food bank or made online at www.themississaugafoodbank.org.

The Mississauga Food Bank is the central food bank in Mississauga. Through its network of 41+ member agencies – including neighbourhood food banks, hot meal programs, and breakfast clubs – they distribute food for over 2.9 million meals each year.