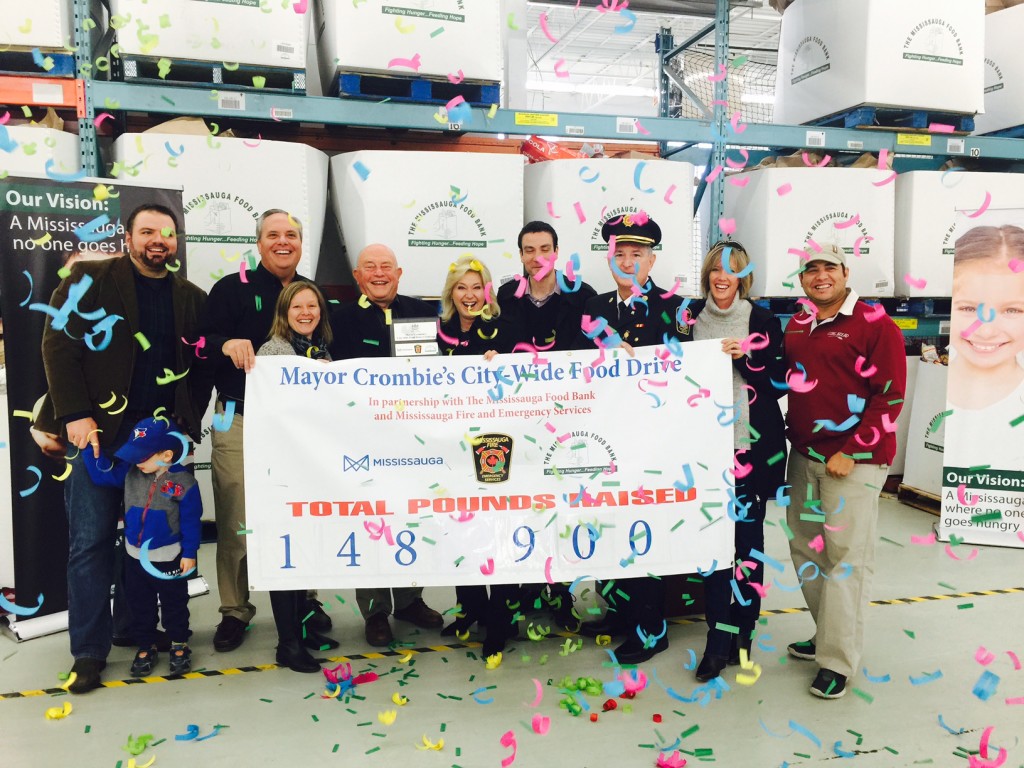 Mississauga, ON – The Mississauga community pulled together to fight hunger this Thanksgiving and have exceeded the goal set by Mayor Crombie’s City-Wide Food Drive Challenge. Mayor Crombie’s partnership with The Mississauga Food Bank and Mississauga Fire and Emergency Services was a friendly competition between each of Mississauga’s eleven wards. Each ward went head-to-head in an effort to collect the most non-perishable goods at their local fire stations.

Fire stations across the city received a flood of generous donations, with Ward 6 raising the most food.

“Mississauga residents have once again proven that we are a city that cares,” said Mayor Crombie, who committed to holding a city-wide food drive during the 2014 municipal election. “The community really rose to the challenge to help ensure no one is hungry in Mississauga.”

“The food bank saw a significant increase in donations this Thanksgiving,” remarked Chris Hatch, Executive Director of The Mississauga Food Bank. “We are overwhelmed by the generosity the community has shown their hungry neighbours and so appreciative to Mayor Crombie and to Mississauga Fire and Emergency Services for partnering with us to make this initiative such a resounding success.”

Chief Beckett added, “We’re thrilled to see Mississauga residents respond with such enthusiasm to the city-wide food drive. As firefighters we strive to keep our community safe and ensuring that each and every resident has food on their table is a big step in meeting this objective. We are honoured to have played a part in this campaign”

At the launch of the campaign, The Mississauga Food Bank released its 2015 Face of Hunger report that profiles food bank users in Mississauga. The report outlined that 13,000 individuals visit the food bank monthly and over 112,000 people in Mississauga live below the poverty line.

Mayor Crombie concluded, “As Mississauga residents celebrated Thanksgiving, they remembered those who are less fortunate. From the bottom of my heart, thank you. We truly live in a caring and compassionate community.”