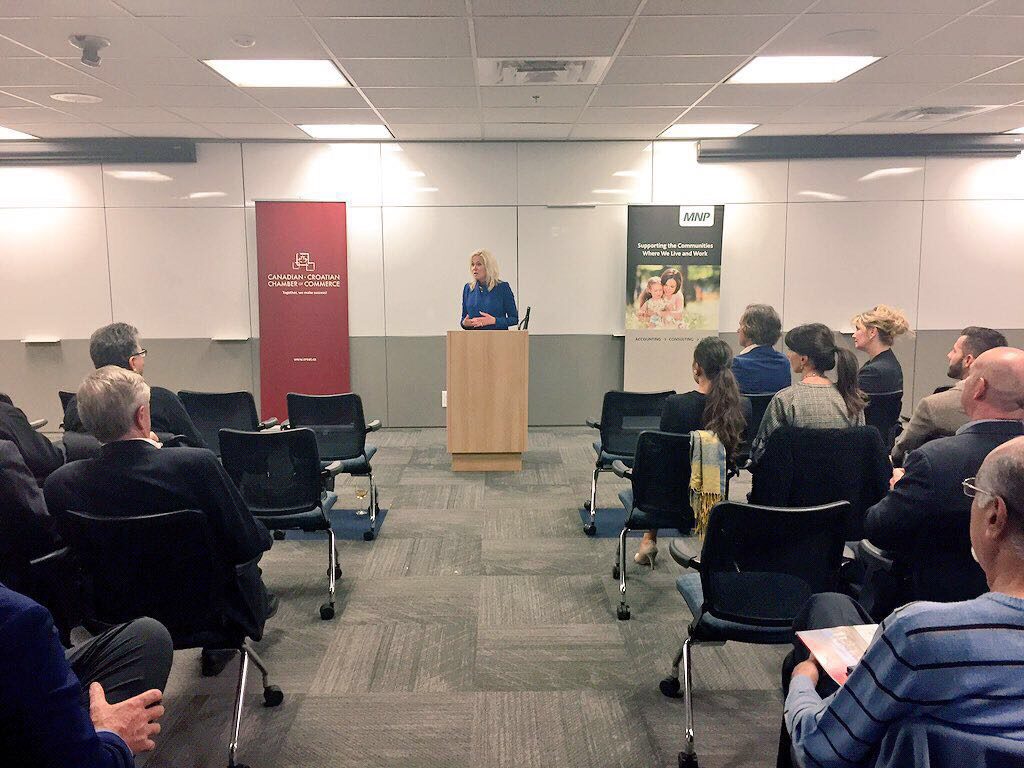 Mayor Crombie addresses members of the Canada-Croatian Chamber of Commerce.

Mississauga has an active, engaged and thoughtful Canadian-Croatian community that continues to invest back in our City as successful entrepreneurs, small business owners and innovative thought leaders, Mayor Bonnie Crombie said.

Mayor Crombie made the comments during a keynote address to members of the Canadian-Croatian Chamber of Commerce.  Founded in 1995, the Canadian-Croatian Chamber of Commerce continues to be an important voice for businesses across the Greater Toronto and Hamilton Area. Mississauga is home to Canada’s third largest Croatian-Canadian Community made up of nearly 10,000 residents.

Mayor Crombie highlighted the staff planning and community engagement taking place as part of the 2018 budget process, reminding members that a city-wide Telephone Town Hall recently took place to hear directly from residents about their budget ideas, priorities and solutions for Mississauga.

On business investor confidence, Mayor Crombie shared with business leaders that “for the fourteenth straight year, Mississauga retains its Triple-A credit rating. It’s a badge of honour. It means you can confidently do business in Mississauga. And it means we can borrow – to build – at some of the lowest interest rates available.”

On infrastructure and public transit, Mayor Crombie spoke at length about the Hurontario Light Rail Transit (LRT) initiative, adding that “we’re on track to get shovels in the ground and construction underway next year. The 20 kilometer – 22 stop LRT – will connect GO Train stations from Port Credit and Cooksville. It will loop around the downtown and be plugged into MiWay.”

“While the bus rapid transit system (BRT) has become an essential east-west service; the LRT will be the north-south spine of a regionally-integrated rapid-transit network,” Mayor Crombie added.

Mayor Crombie also invited those in attendance to the Mayor’s Small Business Forum, taking place on October 25, adding that “all small business owners are invited and encouraged to share their ideas and solutions to help make local government work better for you.”

John Marion, President of the Canada-Croatian Chamber of Commerce said “on behalf of our membership, we are honoured to have Mayor Crombie deliver this keynote address about the exciting and promising city-building initiatives happening in Mississauga, including building transit, generating economic development and helping youth realize and pursue their career aspirations.”