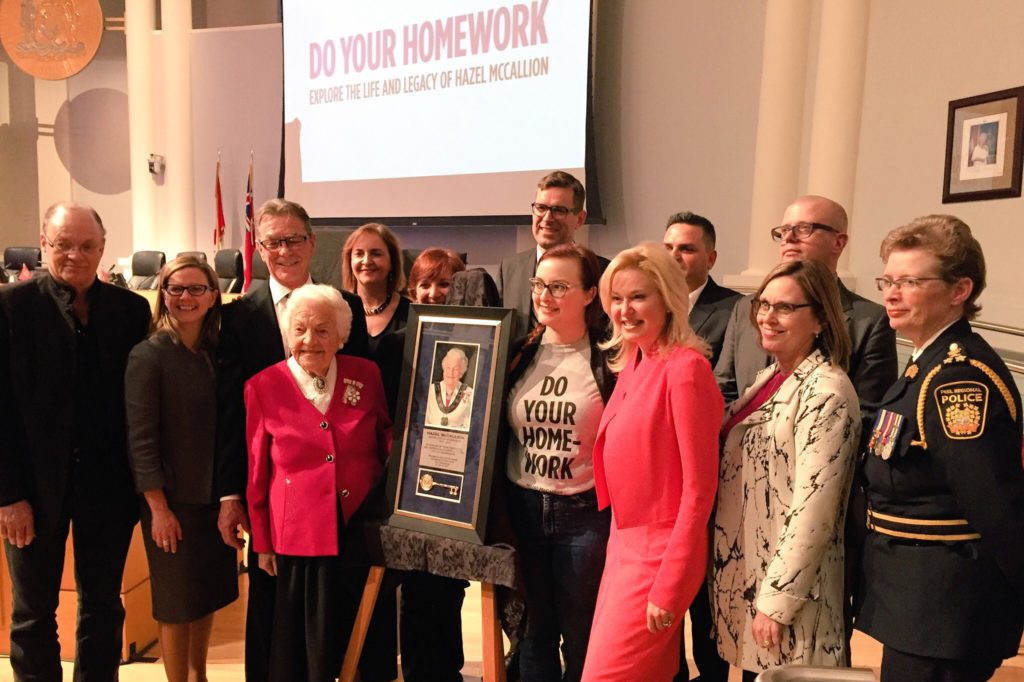 Hazel McCallion Presented Key to the City by Mayor Crombie

This evening Mayor Bonnie Crombie formally presented Hazel McCallion with the Key to the City. The ceremony took place during the launch of the Do Your Homework exhibition. The following remarks can be attributed to Mayor Crombie:

“Good evening, everyone. On behalf of the City of Mississauga, Council and our team of professionals welcome to City Hall.

“It’s only fitting that we gather here to celebrate the life and legacy of Hazel McCallion.

“After all, this is the house that Hazel built!

“Let me congratulate and recognize the team of professionals from our Culture, Museums and Corporation Communications Divisions and all staff who have planned this exhibit for over a year.

“City-building is nation-building. If Sir John A. Macdonald laid the cornerstone for Confederation, Hazel McCallion built on the foundation.

“On behalf of Council and staff I have the honour this evening of presenting Hazel McCallion with a key to the city.

“The practice of presenting a key to an individual can be traced back to medieval times when admission into a city was hampered by many legal restrictions, walls and locked gates.

“By the middle 1800s, it became customary to give a Key to the City as a symbol of the City’s intention that the recipient was free to come and go.

“The act of giving the Key of the City is symbolic.

“Mississauga is far from a gated community. We breakdown walls, build bridges – and especially transit – to bring people together!

“And it was Hazel McCallion who threw down the welcome mat and invited generations of people to live, work, study, raise a family and pursue their dreams in our city.

“Following my remarks we will formally present the key to you.

“Hazel, they call you a hurricane for a reason. You’re a force of nature a larger than life individual; a public servant who always put the public first; a revered city-builder.

“You presided over an incredible transformation of Mississauga, with a record that is second to none.

“On your watch, Mississauga grew from farm fields and fruit trees into a vibrant, prosperous and thriving place so many Canadians continue to choose for a better, more promising life.

“Throughout your 36 years as our mayor, it’s hard to imagine all the lives you have touched; all the people you have inspired; all the families you welcomed here to our community, and to their new home, Mississauga.

“Since we are short on time and long on achievements let me single out a few of Hazel McCallion’s notable achievements.

“During the November 1979 train derailment, Hazel was a constant presence of strength, courage and leadership. You reassured a worried public that all would be safe and well and all was safe and well.

“In 1981, you opened Mississauga to the world by signing a sister-city agreement with the community of Kariya, Japan.

“For over three decades, there has been a wealth of knowledge, culture and opportunity exchanged between our two cities.

“And just like family, the relationship is one of affection. It is genuine, strong and endures.

“City Hall is in the heart of Mississauga’s emerging downtown core.

“The downtown encompasses Hazel’s vision of what Mississauga would one day be: a thriving urban centre; a place connected to a vast public transit network; where people are walking distance from school, work, home and a memorable night out.

“You cut the ribbon and opened Central Library; the crown jewel of our public library system.

“Working with Council and staff, you envisioned a new public space in the heart of our city and created Celebration Square.

“Sheridan College named its Mississauga campus after you.

“It was Hazel McCallion who secured funding to build the Living Arts Centre so local artists could shine.

“It was Hazel who led the charge against Queen’s Park politicians that wanted to scrap the Hurontario LRT.

“And just this past February, Premier we celebrated the inaugural Hazel McCallion Day in Ontario.

“I could go on and on, because the list goes on and on.

“You have a record that’s strong and proud and it stands as a testament to your commitment to the city and people you always put first.

“Congratulations, once again to our dear friend Hazel McCallion.

“You have earned everything you achieved because you worked tirelessly for it.”