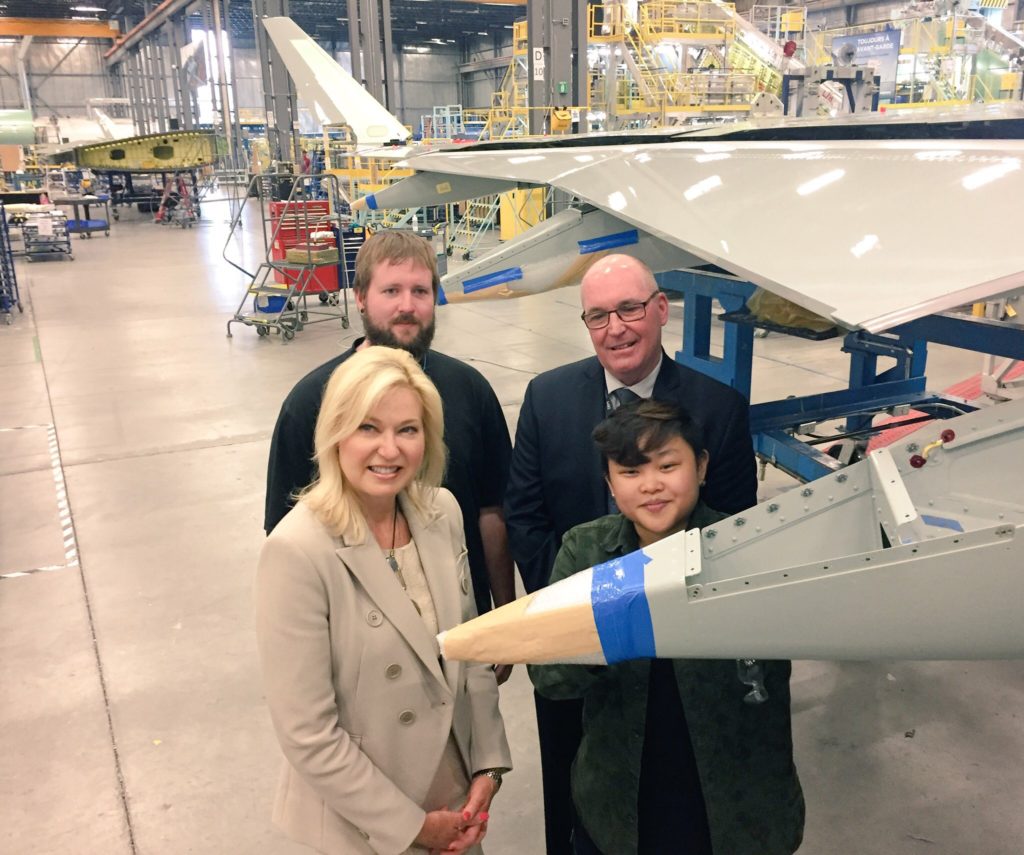 Mayor Crombie made the comments alongside MHICA President Mike McCarthy, at the company’s plant facility in Mississauga, joined by program alumni and employees. The Mississauga Mayor’s Office has partnered with MHICA to raise awareness about the company’s Structural Airplane Apprentice Program.

MHICA, a group company of Mitsubishi Heavy Industries, is a Tier 1 manufacturer of major aircraft structures and assemblies, based in Mississauga, Ontario.  Its facilities include a state-of the-art manufacture and assembly facility and a supply chain and logistics centre where more than 700 highly-skilled employees work on Bombardier’s sector-leading Global 5000/6000 and Challenger 350 Business aircraft. MHICA’s technicians build and join wing assemblies and fuselage centre sections, as well as perform systems and flight control assembly installations and testing.

MHICA’s Structural Airplane Apprentice Program is offered to people between the ages of 18-29. The training program lasts 20 weeks. Certified recruits undertake an 8 month apprenticeship. The program is ongoing with approximately 6 sessions held each year. Approximately 60 positions are available. The next intake of applicants is August 2017. Applicants do not need to have a high school diploma, college diploma or university degree to apply. You do not need to be a Canadian citizen but must be a permanent resident. Candidates will be trained and work out of MHICA’s Mississauga location.

“Candidates in the Structural Airplane Apprentice Program will develop advanced manufacturing skillsets that can be put to work right here at MHI Canada Aerospace. They will develop strong interpersonal, leadership and teamwork skills,” Mike McCarthy said. “Successful candidates who completed the program, and have passed the probation period, have been offered full-time employment here at our Mississauga facility,” McCarthy added.

In April 2016, 22 applicants successfully completed the program and 21 were hired into full-time positions with MHICA. The Structural Airplane Apprentice Program is supported by the Ontario Manufacturing Learning Consortium (OMLC) – a non-profit organization that supports manufacturing firms by providing training, development and certification of employees. Click here for a video about similar program graduates.

Mayor Crombie added “MHICA has had a longstanding mutually beneficial working relationship with the City of Mississauga’s Economic Development Office and this announcement is another example of how Mississauga works closely with local advanced manufacturers to help them grow and succeed.”

“MHICA participated in the recent Building Skilled Talent Together event hosted by the City of Mississauga Economic Development Office,” Mayor Crombie said. “The event was attended by several Mississauga manufacturing companies and education providers and was intended to address the skilled talent gap in advanced manufacturing with concrete actions. MHICA has taken a significant leadership role in this area and will continue to be an innovator in the training of young people for our dynamic aerospace sector.”

Mayor Crombie concluded “with school now finished, and many students now looking for opportunities to start the next chapter of their lives, I encourage them to apply today for MHICA’s Structural Airplane Apprentice Program.”